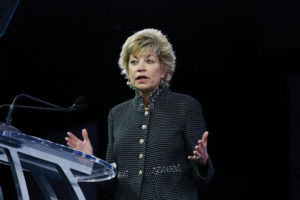 Top Takeaways from the 2016 AHIMA Convention

Attending the 2016 AHIMA Annual Convention and Exhibit in Baltimore, MD had its pros and cons.

The cons: jetlag and responding to the avalanche of work e-mails upon arrival back in the office.

“This is our future,” said Lynne Thomas Gordon of AHIMA’s new strategy.

The good news is that if you weren’t able to travel to Baltimore, the Journal has you covered—and you time to spare since you’re caught up on your e-mails. The convention closed a little over a week ago, which has given AHIMA’s top subject matter experts—presenters and organizers of many of the convention’s events—time to reflect on all that they learned during the action-packed week. We’ve broken down convention takeaways by HIM domain.

This year marked the 10-year anniversary of AHIMA’s Privacy and Security Institute, which attendees helped celebrate with cake, champagne, and a slate of top-tier speakers, according to Angela Rose, MHA, RHIA, CHPA, FAHIMA, a director of HIM practice excellence at AHIMA. The Institute is held on the Saturday and Sunday prior to the formal kickoff of the convention.

Baltimore’s proximity to Washington, DC, and federal agencies such as the Department of Health and Human Services’ Office for Civil Rights (OCR) and the Office of the National Coordinator for Health IT (ONC) helped Rose recruit speakers such as Deven McGraw, Esq., OCR’s deputy director of health information and privacy. Rose says Institute attendees were hanging on to McGraw’s every last word “because she makes all the decisions about their privacy and security programs,” Rose said.

Click here for the AHIMA Today article on McGraw’s presentation.

While attendees of the 2015 AHIMA convention were literally counting down to the October 1, 2015 go-live of ICD-10-CM-PCS, this year coding-focused convention goers were more concerned with ICD-10 updates for 2017 and with how the recently finalized MACRA final rule would impact providers.

In addition to coding and clinical documentation improvement (CDI) sessions held throughout convention, AHIMA also convened the Clinical Coding Meeting held on the Saturday and Sunday prior to the convention’s official launch.

“We had a great crowd for both days of the Clinical Coding Meeting,” said Donna Rugg, RHIT, CCS, CDIP, a director of HIM practice excellence at AHIMA. “We also had more registrants listening via live streaming than last year… Attendees were anxious to hear about ICD-10 post-implementation and CDI—both of these tracks were well attended and we had good Q&A sessions with presenters and the attendees.”

Tammy Combs, MSN, RN, CCS, CCDS, CDIP, a director of HIM practice excellence at AHIMA, said it was exciting to see so much interest in outpatient CDI from those who attended the coding meeting.

“It was exciting to see how interested CDI specialists are in outpatient CDI and expanding CDI into specialty areas such as skilled nursing facilities, pediatrics, home health, and critical access hospitals,” Combs said. “The outpatient CDI workshop had a great response. We had several people come up afterwards making comments about how they enjoyed it and they would like to have more outpatient information from AHIMA.”

Ann Meehan, RHIA, director of information governance at AHIMA, felt that attendees were interested and engaged in learning more about IG, and that IG knowledge among convention goers ranged from people who weren’t familiar with the term “information governance” to individuals that are actively implementing IG programs.

“It’s always a learning experience to hear from others who are on the IG journey and to learn new ways that people are going at it. The IG Roundtable and the IG Leadership Forum on Sunday, allowed attendees to interact and share their experiences,” Meehan said.

Meehan said that throughout the convention a theme she kept hearing is that the role of the HIM professional—whether a coder, a CDI manager, or other—is evolving.

“We must all step up and prepare ourselves to evolve with it. We don’t want to become the next ‘Blockbuster Video’ as Lynn [Thomas Gordon] said. That was absolutely the pervasive theme throughout the convention… and IG is part of that,” Meehan added.

Click here for more Journal coverage on IG at convention.

The mission of AHIMA’s standards team at this year’s convention was to was to raise awareness about AHIMA’s role in standardization of HIM practices and guiding the development of Health IT standards for interoperable health information systems, according to Anna Orlova, PhD, senior director of standards at AHIMA.

Orlova and her team were thrilled to find that attendees at standards-related sessions were engaged and interested in learning about the concepts, processes, and entities of standards development activities. Additionally, Orlova received several inquiries from individuals who were interested in joining AHIMA’s Standards Task Force.

“There is growing interest in participating on the AHIMA Standards Task Force. Those who already participate in the Task Force strongly advocated for continuation of AHIMA involvement in standardization efforts both nationally and globally,” said Orlova.

At the session “Data on the Go: Keeping up with mHealth,” presenters shared success stories about improving patient engagement with people with chronic illnesses via mobile devices.

The question Orlova and her team heard the most often was “How can I get involved?” and “How would I use standards in my organization?”